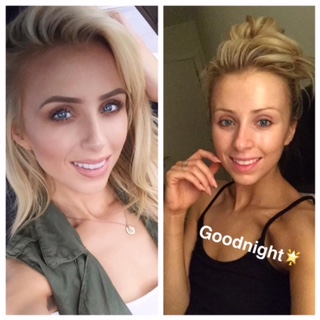 Since talking openly about suffering from acne a few years ago, I have been asked multiple times a week to do a blog post about how I managed to clear up my acne, and how I deal with the dreaded scarring that many people are left with. Today, I am going yo tackle my acne story and will follow up with more skincare posts about my scarring and how I am treating that. The photo above is make up vs bare face…something I could never have posted a few years ago.

I had pretty normal skin as a young teenager, getting the odd breakout here and there from hormones or bad eating, but generally my skin was fine. It was only in my late teens that I began to suffer badly from acne.

What began as a hormonal breakout evolved into full blown acne in a matter of weeks. It was only ever on my face, never spreading to my neck or body, but as a young girl, it bothered me terribly.

Luckily, I was a makeup fan from a young age so was able to begin covering up my acne, but that wasn’t helping the situation, and it began to get worse and worse over time. My skin used to be aching, feeling bruised and sensitive to touch. I went to my GP who firstly put me on Dianette, the hormonal contraceptive pill which was meant to be good for clearing up bad skin. Although this did help temporarily, it sent my moods into a crazy spin. I was angry, short tempered and very emotional all the time and knew I couldn’t continue the treatment as it just wasn’t agreeing with me.

I went back to my GP and was prescribed Minocin tablets to treat my skin. I stayed on them for about a year and I did see an improvement, but like before, it didn’t clear it completely. Eventually they stopped working altogether.

In the mean time I had been trying every topical treatment recommended, including Zyneryt and many other cleansers and creams, all of which did nothing but irritate my skin further.

I got to the point where I felt like nothing was every going to work for me, and that I would just have to live with itnand learn to cover it as best I could.

And thats what I did for a few months. I mastered the art of disguise and spent hours carefully applying camouflaging make up, in hopes of the problem just going away.

It was actually my mum who eventually sat me down and said enough was enough, and that I needed to see a skin specialist. My GP referred me to an amazing Dermatologist who was based in the Beacon Clinic, Dr. Sharareh Ahmadi.

I was given an appointment to see Dr. Ahmadi and went along hoping she had the answer. When I met her, my confidence was on the floor. I was fine when I had my ‘mask’ on, but once she asked me to remove my make up I broke down in tears. I felt so vulnerable, so ashamed that anyone had to look at my skin that way, and so down. We had a chat about what I had already tried and what treatments were left.

She then spoke to me about Roacutane. I heard so many horror stories about this drug and initially said no to ever trying it. The link to depression and suicide was all too much for me, and I just felt that it wasn’t worth the risk just to get my skin clear.

However, after going home and researching everything there was to know about the drug and talking it through with my family, I decided that as long as I was in the safe care of Dr. Ahmadi, I would give it a go.

There are so many criteria that your doctor has to consider before they will prescribe you with Roacutane, but luckily I was the right candidate for it so we began the course of treatment. I had to return to my Dermatologist every 4 weeks to do a pregnancy test, have my bloods taken and to have an assessment on how I was feeling mentally. The reason or the pregnancy test was because if you were to fall pregnant while taking the drug, it would cause severe and life threatening complications for the baby. It was drilled into my head from my Dermatologist and also from the chemist every time I went to pick up my medicine.

The blood tests were to determine wether your liver was being affected or damaged as Roacutane is such a strong drug. Also, you are not allowed to drink alcohol whilst taking this drug for the same reason.

I was on a dose of 10mg for 6 months and by the end of the 3rd month I started to see a huge improvement to my skin. By the end of the sixth month I had totally clear skin or the first time in years.. I couldn’t believe I was looking in the mirror at my bare face and not totally disgusted or horrified. My skin was flawless, bar the odd scar left on my cheeks.

People talk a lot about the side effects of talking Roacutane, but I am lucky to say I didn’t experience any. The only thing I noticed was my skin was a lot drier which was totally expected, and I was given lots of Image Skincare products to help me out.

Everyone’s skin is different, and what has worked for me may not work for others. If you are suffering from acne right now, please talk to your GP before trying anything that I have mentioned above.

I have had clear skin ever since my treatment finished, and only every get the odd breakout from alcohol, bad food or hormones. These tend to last 2/3 days and are not painful at all.

I was not sponsored to talk about any products or services mentioned in this post, but if it helps even one person who is suffering then it was worth sharing my story.

You may also enjoy: